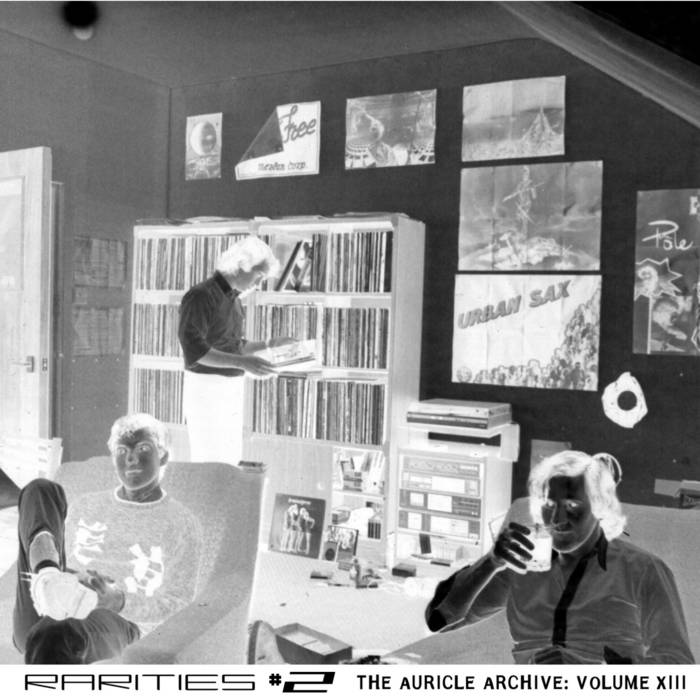 Back in our real early exploratory days, before we had any instruments, we issued a number of pretty low-fi and/or crudely produced cassettes that are best left in obscurity. In fact many of those tapes are now lost altogether. Of what remains, much of the best was issued in the original Auricle Archive, excepting a largely very good "various artists" album called "Multum In Parvo" (Latin for "Many different things in the same place") and two other such samplers "Illuminated Pleasures" and "A Breeze Of Time", all of which contain excellent material undocumented elsewhere.
"Multum In Parvo" was a c90 cassette, and has remarkably survived 24 years with very little decay. Largely a pretty good example of our primordial experimentation, I decided not to do a straight reissue, as some material on side 2 of the cassette was a mite too crude to be worthy of inclusion. Also, as one of the Region 5 tracks had serious drop-out (and a version of that is documented elsewhere) and a couple of others I could edit down to much more cohesive works, I decided on this release, also featuring Peter Harrison's very nice spot on the Inkey$ 8 cassette magazine.
Listening back to this old material nowadays, I'm surprised to realise there is a continuity of single-mindedness in the way we have made music over the years, with certain collage techniques still being key to the way we make music today. Back then though we had no instruments. All the electronics were done with an old ITT cassette recorder, wiring the inputs to the outputs via our hands! Yes, depending on how hard you grabbed the wires, how loud the levels and tone controls were, and how much you were sweating (!) it all had an influence on the sound produced, resulting in weird chugging and whirring sounds mostly. Also, home made cassette loops, tapes at wrong speeds and played in broken machines that would stutter.
Blatant plagiarism was also part of our art, with hand wound turntables a favourite instrument of the time. Actually, all the material involved in the early Region 5 recordings is from LP records, obscure bits of synth music, bits of weird library records, etc. Amazingly all this was done without any mixing equipment, by recording to one cassette recorder and then playing that back together with a second layer, and so on. So, if you recognise anything in the recordings on this disc it could well be what you think it is. Most obvious are bits of Stockhausen's HYMNEN and the flute of Bob Downes.

All tracks recorded in the living room, at our flat, St. Stephens Road, Highfields, Leicester (January-March 1983).
Recompilation, mix and editing by Alan Freeman, in my bedroom (1-9 December 2007), largely from the "Multum In Parvo" release.